In Geneva, negotiators leave the job half done

Last week, negotiators from all countries gathered in Geneva for the first round of climate negotiations this year and agreed on a new draft text to be adopted in Paris in December. With 86 pages, 54000 words, 1234 square brackets, the text doubled in size from the previously agreed version, the so-called Lima Climate Action Plan. 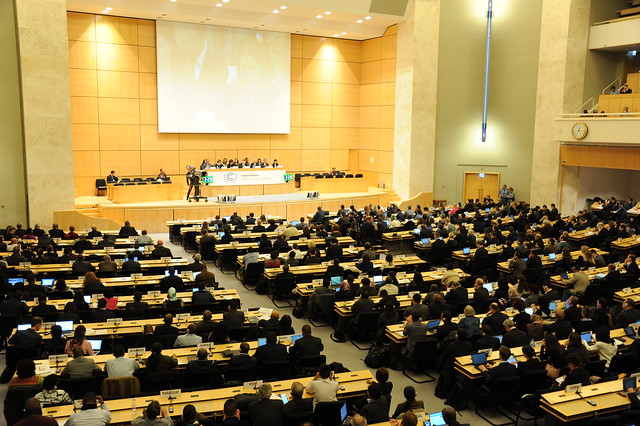 Just a few weeks after difficult talks in Lima, countries’ delegates and civil society organisations were still worried about the path these UN negotiations would be conducted over the next 12 months. But the newly appointed co-chairs of the ADP (one of the most important negotiating channel in the UNFCCC process), Mr Daniel Reifsnyder (USA) and Mr Ahmed Djoghlaf (Algeria), proposed a different approach facilitating the ownership of the text by all countries and encouraging them to decide upon the methodology of negotiation to follow.

The first half of the week was basically dedicated to additions countries wished to add, reflecting all views and options which were left out during the last 36 hours of hard negotiations in Lima. Thus the ADP co-chairs primary objective to ensure a draft agreement text being delivered in Geneva was fulfilled with carefulness and great participation of all countries.

Many proposals figuring in the current text are contradictory but some are ambitious or good enough to significantly keep global warming closer to 1.5°C and to organise a fair effort-sharing of emissions reduction. All Southern countries showed strong unity from the start of the session and ensured that Adaptation actions to climate change and the issue of Loss & Damage are well addressed in separate sections. It includes also a regular and robust reviewing process of targets to occur every five years, allowing update of targets and efforts according to realities of countries and new scientific findings. Similarly, there is an option of a five-year cycle reviewing and updating system for collective targets of financial support by traditional industralised countries and others “in position and willing to do so”, as well as a cycle process for poorer countries to identify the support they need for climate action.

As one of the condition to ensure success in Paris, there is a reference to a scaling-up road map to meet the committed target of 100 billion $ per year by 2020 for the Green Climate Fund which rich countries committed in 2009. Several countries constructively proposed new, additional and predictable sources of finance like: including international transport emissions, so-called bunkers, in the agreement, with the IMO and ICAO creating new finance and preventing huge increases of the emissions predicted for these sectors; a dedicated share of revenues from the carbon markets, in particular the EU ETS if reformed; a Fossil Fuel Extraction Levy to be paid into the Loss & Damage mechanism; and a share of the Financial Transaction Taxes revenues to the Green Climate Fund.

As the new Paris agreement plans to involve all countries in making efforts to tackle climate change, the concept of differentiation is one of the most contentious issues to be resolved. Several proposals included in the new text try to answer the question of how to determine numerically when countries are doing their fair shares in terms of domestic mitigation and international means of implementation. Some countries argue that a solution can be found and included in the annexes with the danger that it will never be operationalised. Others like Brazil propose to create a new grouping for emerging economies, and the vast majority prefer to organise a system based on self-determination of commitments by parties. However the best proposal, in ACT Alliance views, was put forward by Ethiopia advocating for an assessment process based on a set of equity indicators, like adequacy, responsibility, capability, adaptation need and development need, instead of locking countries in a categorising system which will reveal being outdated quickly and will lack flexibility.

Unexpectedly and following the call from more than 240 NGOs, including ACT Alliance EU, for a reference to Human Rights (HR) in the agreement, Mexico, Uganda, Chile, EU, Bolivia and Tuvalu supported the inclusion of Human Rights, the right of indigenous people and the issue of gender equality in different parts of the text. During the closing plenary 18 countries announced having signed a voluntary pledge on Human Rights and Climate Action to facilitate the sharing of best practice and knowledge between HR and climate experts at a national level.

By the middle of the week, a new draft negotiating text was ready with every countries having added all elements they wanted and with minor corrections to be handled by the UNFCCC secretariat. But the initial second objective of the ADP co-chairs for this week to streamline the text by removing duplications and redundancies, failed for reasons which are not quite clear (see paragraphs 12 and 14 of the ADP 2.8 co-chairs informal note). In the corridors some say it is simply because delegates were not ready to intensively negotiate in Geneva, others affirm that the co-chairs were taken by surprise by the speed with which the text had been produced.

As a result, countries delegates spent the rest of the time discussing the methodology of negotiation to adopt for the next session in Bonn early June as well as pre-2020 climate actions which are crucial to avoid dangerous climate change and higher costs related in the near future. In parallel, the three-year long Structured Expert Dialogue drew its conclusions, showing more and more evidences of dangerous climate change even with 2°C global warming and that we are not on track to stay under this limit. During an exchange of views regarding pre-2020 actions, Ethiopia made an other interesting proposal to divide the global emission budget amongst all parties according to the Convention’s principles and provisions with clear indications on the quantity of greenhouse gas (GHG) emissions which traditional industrialised countries may emit, to specify a 1.5°C target, and to set up a limit for countries to offset up to 20% of their emission reductions in the territory of other countries when using market mechanisms.

The atmosphere in Geneva was unexpectedly good in regards to UNFCCC history, especially the past two years. In contradiction with the urgency of climate action, often reaffirmed by most of the countries, the slowness of diplomatic talks is necessary not to embark in steamed and unfruitful negotiations which could compromise the delivery of an agreement. However several voices such as that of the EU raised concerns about the length of the new draft text and the lack of reactivity in the facilitation of the co-chairs, wasting precious time. The EU and other negotiators rightly reminded the audience of the traumatising scenario of Copenhagen, six years ago, insisting that the co-chairs ensure significant progress at the next session. A remark which hasn’t fallen on deaf ears and will be repeated in future if the EU shows unwillingness to compromise and tries to hide behind blockers.