New Report! The Scandal of Inequality: the multiples faces of inequality in Latin America and the Caribbean 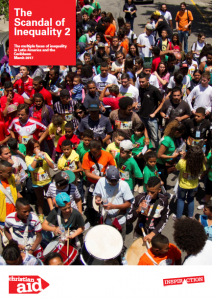 A new Christian Aid report, ‘The Scandal of Inequality: the multiples faces of inequality in Latin America and the Caribbean’ highlights that inequality in the region based on identity, gender, economic situation, climate change impact or geographic location remains an outrage.

These inequalities interlink and exacerbate exclusion for many people, stalling development.

Women bear the brunt of inequalities in Latin America and the Caribbean: they are more often victims of violence, fiscal systems are weighted against them, they have fewer opportunities for decent work and are often the most affected by climate change.

Since the publication of Christian Aid’s last report on inequality in 2012, the region has seen some improvements. Yet despite millions of people moving out of poverty, wealth and social inequalities remain deeply entrenched and the region still remains the most unequal in the world.

“For us social justice means a more equitable society, not only in financial terms, but in terms of people’s ability to exercise their rights, in public policies that includes all people and help to reverse inequality,” says Mara Manzoni Luz, Christian Aid’s Head of Latin America and the Caribbean.

The report looks at ethnic and racial identity, and gives special attention to the situation of indigenous and afro-descendant groups, given they are disproportionately affected by social exclusion and racism.

As well as exploring the issues of inequality, the report also examines how gender-based violence – including rape and femicide – are prevalent in the region, and contribute to its position as one of the most violent places in the world. Of the five most dangerous countries for women, four are in the region, with El Salvador holding the record for the highest murder rate of women on the planet.

The report states that fiscal justice can play a major role in reducing inequality – not only through tax transfers, but also through the implementation of more progressive tax systems, the investment of tax revenue in universal social services, and fairer and more transparent systems for investment in countries.

Civil society, including faith-based organisations and social movements, have a key role in tackling structural inequalities and holding governments to account, demanding change and speaking out about experiences of inequality.

The report urges governments and civil society to: