Keeping global warming below 1.5C will benefit us all

Last year saw two major international decisions taken regarding the future of humanity, namely the Sustainable Development Goals and the Paris Climate Agreement. The first one sets a series of 17 goals touching upon health, education, gender, resilience and other key objectives which every country needs to follow and achieve to ensure safe and fair development for all. The second agreement defines a new climate regime where all countries engage in keeping global warming “well below 2°C” and striving for 1.5°C.

Climate change is one of the current major threats to human kind’s future as well as to its development. Today with already 0.8-1°C global warming, we see many impacts. These are greatest around the equator but are also seen in every region of the world.

Through a well-coordinated strategy the most vulnerable countries succeeded in Paris last December to include in this new universal climate agreement the goal of 1.5°C, just half a degree Celsius less than the commonly agreed 2°C goal. The difference of 0.5°C makes a big difference in terms of impacts on our ecosystems and societies. It will reduce the intensity and frequency of heatwaves, water salinisation, drought and other extreme weather events. It will limit the sea level rise, the loss of crop yields and food insecurity. 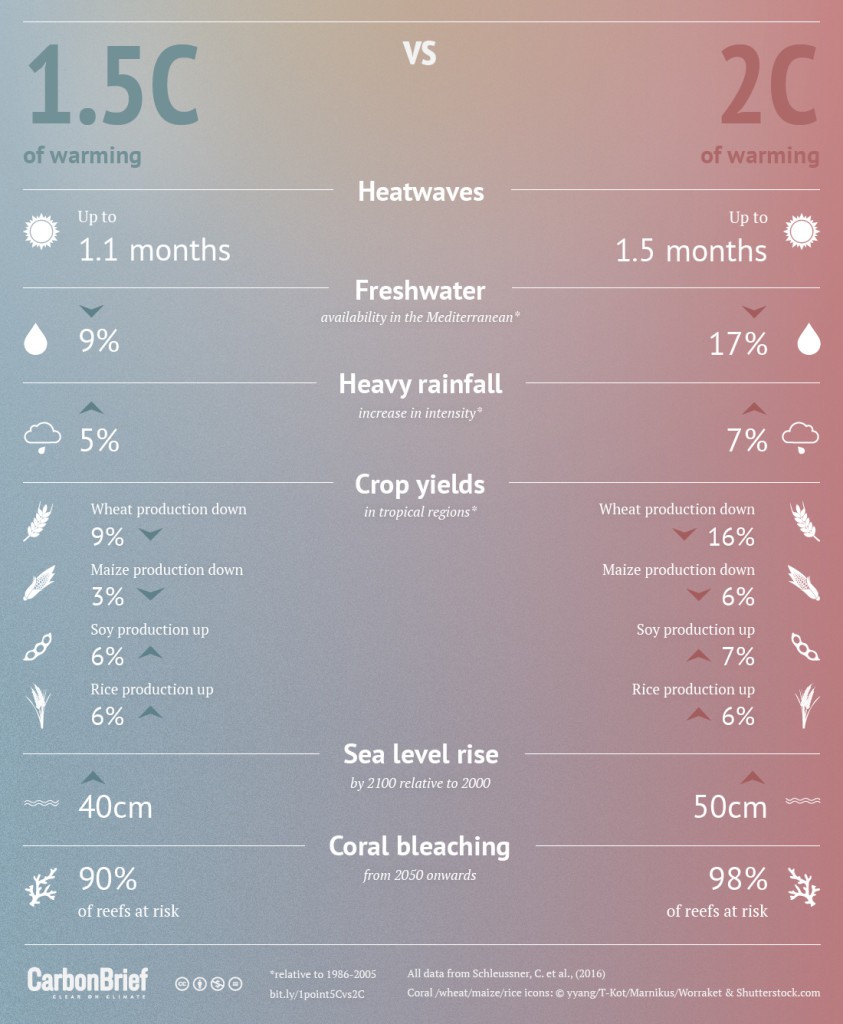 Stopping climate change and striving for keeping global warming this century to 1.5°C is not a burden, as many industrials and governments try to convince us, but on the contrary represent significant benefits for all, especially the poorest and most vulnerable among us.

During the European Development Days, an annual gathering in the EU capital, of every stakeholder involved in the development sector, the Climate Vulnerable Forum, CARE, Oxfam, CAN and ACT Alliance organised a series of action to raise awareness of the new temperature goal agreed in Paris and the benefits which it represents for this sector. 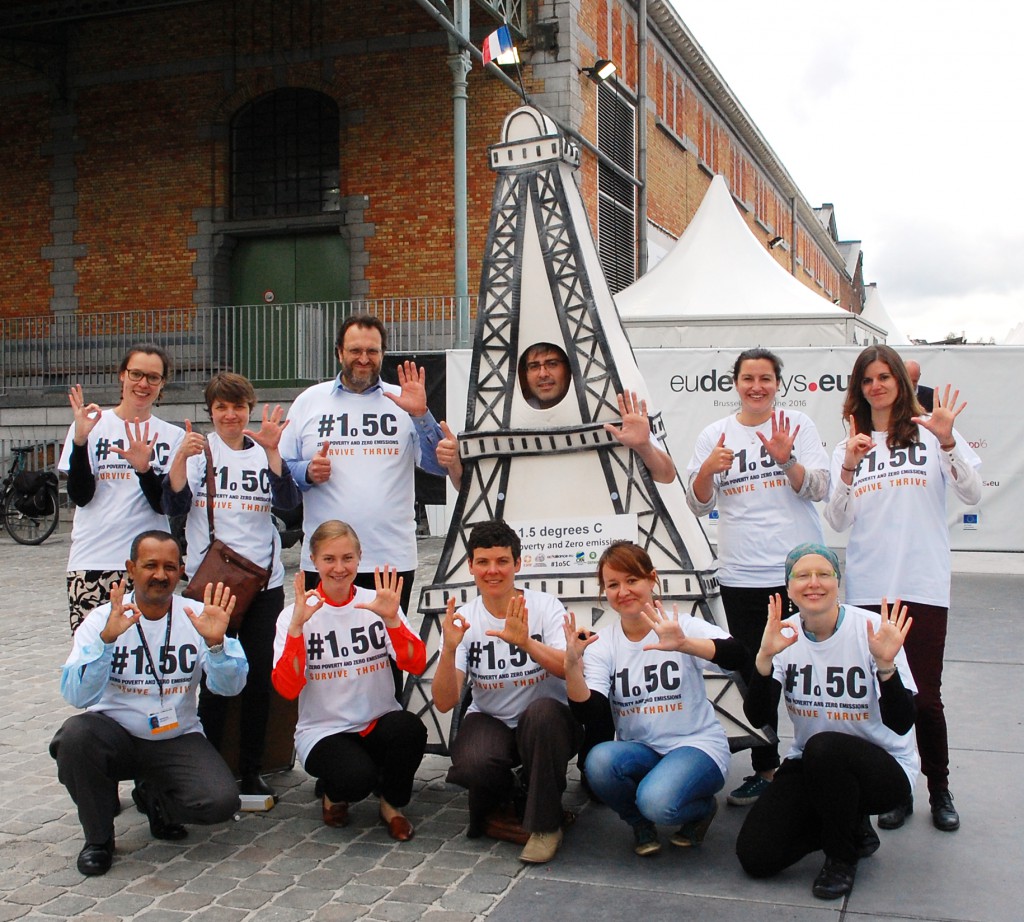 Keeping global warming below 1.5°C could contribute to the achievement of the 17 Sustainable Development Goals with less adverse climate change impacts harming the poor on agriculture, food security, gender inequalities and productivity losses. It would mean better health due to less heat stress and air pollution, better water access due to less severe droughts, healthier and protected ecosystems, healthier oceans and coral reefs with less acidification. By doing so it will build on quality education, push innovation for zero emissions and climate-resilient infrastructures and cities, accelerate the shift to sustainable production and consumption and help avoid climate-triggered conflicts. Finally to achieve these goals the international community will have to rapidly shift to 100% sustainable renewable energy for all and industrialised countries to massively scale-up climate action and financial support to poor countries. 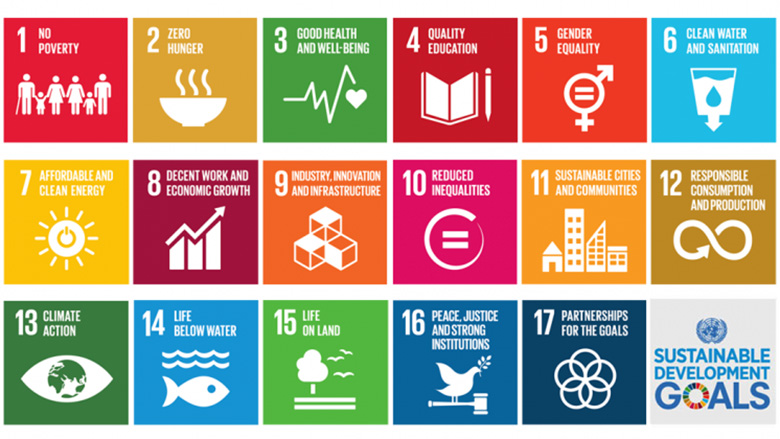 The EU has a huge responsibility as a major historical carbon emitter and can play a critical role as the biggest donor in the world and by courageously increasing its transition to a low carbon society. First and foremost it is urgently needed to put the Paris Agreement into action and to reassess all policies in the light of the 1.5°C goal. There is no time to waste, as according to several scientific studies this temperature threshold will be reached by 2021 or 2025 at the latest if the level of carbon emissions don’t peak now.

Currently the EU and its Member States are busy sharing the efforts of the EU 2030 climate targets, one of them being the “at least 40%” reduction of greenhouse gas emissions below 1990 levels. However this target was agreed before Paris and doesn’t factor in the new 1.5°C goal. Despite positive public communications, many European governments refuse to first revise this collective target hiding behind egoistic national considerations.

Keeping global warming below 1.5°C is technically feasible and would cost less than dealing with all impacts in the decades to come. The EU Climate Commissioner, Mr Arias Cañete, who played a significant role in the adoption of the Paris Agreement within the High Ambition Coalition (an informal coalition of African, Caribbean, Pacific, American and European countries set up secretly in 2015 in the run-up to the COP21 in Paris), has agreed to acknowledge this goal and to revise the mid-century EU climate strategy before the end of his term in 2019. This low carbon strategy should be ready early 2018 before the major rendez-vous of all countries later that year to assess the efforts made and needed to limit climate change. 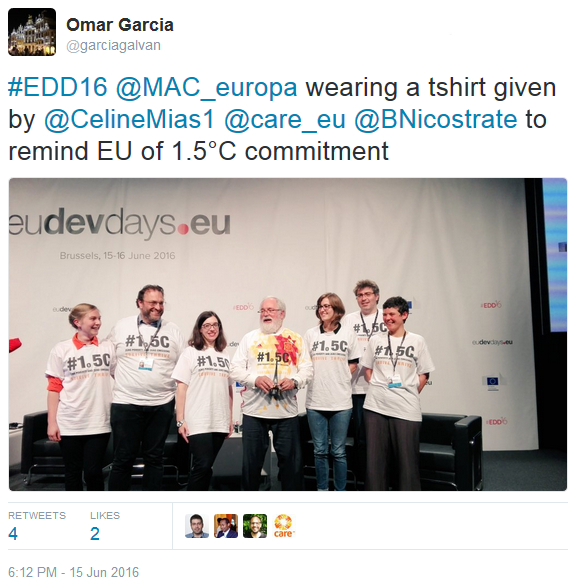 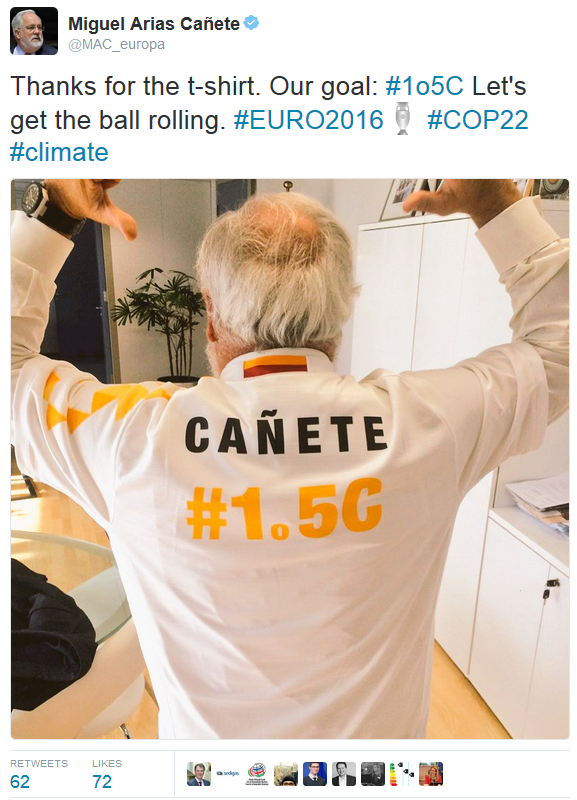 Such a new EU strategy could be an important triggering opportunity to increase efforts for the next decade and force all European countries to adjust their climate plans in line with the Paris Agreement. Nevertheless the level of change required in a very short period of time is so essential that we must all act at all levels and convince all obstinate politicians to change right now our development and economic patterns.