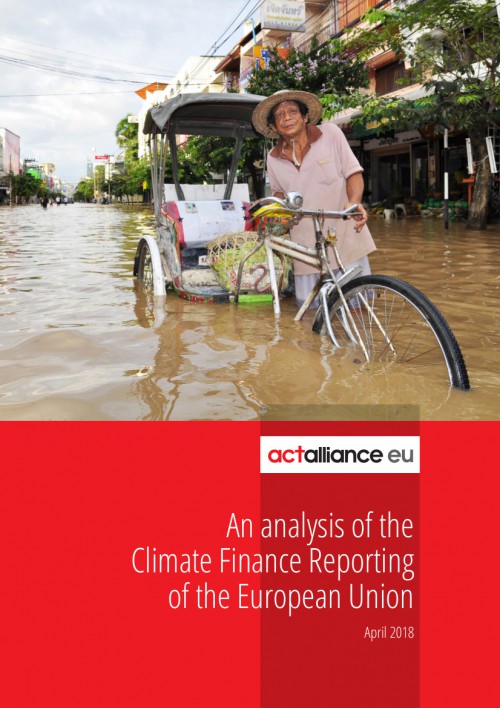 The EU, together with all other developed countries have committed to mobilise up to USD 100 billion annually by 2020 onwards to support poor and vulnerable countries around the world, in their efforts to deal with climate change. This support should be balanced between mitigation and adaptation projects.

A new study, “An analysis of the climate finance reporting of the European Union”, has analysed the EU climate finance aid and the conclusions point to several critical concerns. ACT Alliance EU’s Director, Floris Faber, comments:
“People who are living in poverty and in vulnerable conditions around the world face the impacts of climate change in their everyday life. In spite of their limited contributions to global emissions, they are the ones who suffer first and most when drought, floods and hurricanes become stronger in the wake of climate change.”

The EU has committed to support developing countries, however, it seems as though the EU has lagged behind in its commitment.

Based on EU reporting on climate finance aid, the new study shows that the European Investment Bank (EIB) falls short of providing adequate support to help vulnerable countries adapt to climate change, missing its own target of 35% of aid towards developing countries to be climate finance, with current levels at 27%.

The European Commission as well as the European Development Fund have made progress on providing support to poor countries, as well as on reaching a balance between support for both climate change adaptation and mitigation. However, the support from the EIB strongly favours mitigation in middle-income countries to the detriment of the much needed adaptation support in the most vulnerable countries. As a result only one third of EU’s own total climate finance aid was spent on adaptation.

What’s more, a high proportion of EU climate finance is delivered as loans, which means that developing countries will have to repay the support that they received. In 2016 the EIB’s share of EU climate finance represents 41% of the total of EU climate aid that is being reported. Floris Faber comments:
“Loans could play an important role, but it is not fair to count the money which developing countries are expected to repay. This is in contradiction with what overseas assistance is meant to be. In this case, the agreed support becomes a bill which poor people will have to pay.”

Climate finance aid does not go to the countries that are most in need, as the poorest countries are most dependent on external support.  From 2013 till 2016, 19% of EU’s level climate aid was provided to the Least Developed Countries (LDC) annually on average, a similar amount only for Turkey. Turkey is by far the first recipient country of climate aid from EU. Among the top 10 recipient countries, Bangladesh comes 7th and is the only LDC.

Floris Faber comments:
“We were surprised to find that Turkey is by far, the biggest receiver of climate finance from the EU. I am sure that Turkey, and other rich developing countries could benefit from the support, but there is a large number of poorer and more vulnerable countries who have no chance to take action, unless they receive support. They should receive a bigger share of the funds coming from the EU.”